30 ¶And he said, Whereunto shall we liken the kingdom of God? or with what comparison shall we compare it?
31 It is like a grain of mustard seed, which, when it is sown in the earth, is less than all the seeds that be in the earth:
32 But when it is sown, it groweth up, and becometh greater than all herbs, and shooteth out great branches; so that the fowls of the air may lodge under the shadow of it.
33 And with many such parables spake he the word unto them, as they were able to hear it.
34 But without a parable spake he not unto them: and when they were alone, he expounded all things to his disciples.
35 And the same day, when the even was come, he saith unto them, Let us pass over unto the other side.
36 And when they had sent away the multitude, they took him even as he was in the ship. And there were also with him other little ships.
37 And there arose a great storm of wind, and the waves beat into the ship, so that it was now full.
38 And he was in the hinder part of the ship, asleep on a pillow: and they awake him, and say unto him, Master, carest thou not that we perish?
39 And he arose, and rebuked the wind, and said unto the sea, Peace, be still. And the wind ceased, and there was a great calm.
40 And he said unto them, Why are ye so fearful? how is it that ye have no faith?
41 And they feared exceedingly, and said one to another, What manner of man is this, that even the wind and the sea obey him? (New Testament, Mark, Chapter 4)

Posted by Angela Jensen at 8:02 AM No comments:

Jonathan's amazing digital art. He's like a borg or something. :)
Posted by Angela Jensen at 6:20 PM No comments: 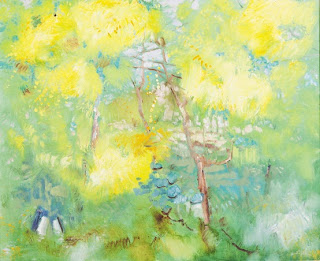 There's too much darkness in this world. We should bring as much light into it as possible. That doesn't mean ignoring the fact that there is darkness. It means recognizing that light is ALWAYS stronger than darkness. :)

(Painting: Wattle by Clifton Pugh)
Posted by Angela Jensen at 9:10 AM No comments:

Robert W.: You latest book idea sounds cool; you should collaborate with the MythBusters! My question: Geeks are far cooler now than they used to be. What do you think was the biggest factor in that change?


Ken Jennings: Robert: I think two things led to geeks winning the terrible jocks-vs-nerds conflicts of the 1980s. One was the computer revolution: today's big tycoons and power players aren't broad-muscles he-men with big muttonchop sideburns like Rockefellers and Vanderbilts. They're pale, spindly creatures with acne scars and possibly some kind of autism-spectrum disorder: your Zuckerbergs and Gateses and Jobses. Second, the first kids raised on geek culture grew up and started running media companies, so now hobbits and wizards and superheroes aren't niche properties anymore, they're the subjects of summer tentpole movies.
Posted by Angela Jensen at 4:23 AM No comments:

Think of the purest, most all-consuming love you can imagine. Now multiply that love by an infinite amount—that is the measure of God’s love for you.
God does not look on the outward appearance.  I believe that He doesn’t care one bit if we live in a castle or a cottage, if we are handsome or homely, if we are famous or forgotten. Though we are incomplete, God loves us completely. Though we are imperfect, He loves us perfectly. Though we may feel lost and without compass, God’s love encompasses us completely.
He loves us because He is filled with an infinite measure of holy, pure, and indescribable love. We are important to God not because of our résumé but because we are His children. He loves every one of us, even those who are flawed, rejected, awkward, sorrowful, or broken. God’s love is so great that He loves even the proud, the selfish, the arrogant, and the wicked.
What this means is that, regardless of our current state, there is hope for us. No matter our distress, no matter our sorrow, no matter our mistakes, our infinitely compassionate Heavenly Father desires that we draw near to Him so that He can draw near to us.

"These things I have spoken unto you, that in me ye might have apeace. In the bworld ye shall have ctribulation: but be of good dcheer; I have eovercome the world."  John 16:33
Posted by Angela Jensen at 11:18 AM No comments:

Advice my cousin heard her 3 yr old giving her 2 yr old. "So the moral of the story is don't put a whole roll of toilet paper in the toilet and don't put your hand under the couch." Wish I heard the rest of that story! ;)
Posted by Angela Jensen at 3:24 PM No comments: